March for Our Lives

HomeGet InvolvedMarch for Our Lives
A- A A+

March for Our Lives 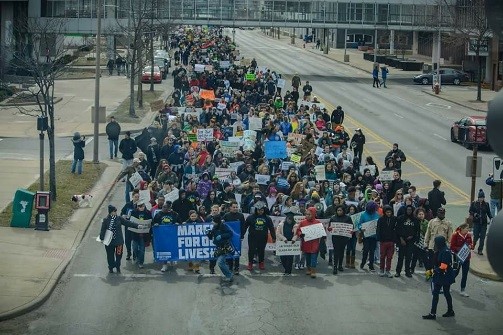 In March of 2018 March for Our Lives, organized by students from area high schools, drew as many as 2,000 participants protesting gun violence and the lack of action by Congress. The march followed the mass shooting at Parkland High School in Florida. Students from the YWCA’s Teen Outreach Program (TOP) organized the local event. TOP teens engage in after-school activities that deepen their engagement in community programs and responsible citizenship.

In addition to organizing the March for Our Lives event, TOP teens have supported voter registration drives and hosted candidate forums for local elected officials.

Penny Tullis, the YWCA’s Youth Development director, emphasized that the march was planned and organized by students. The YWCA’s youth development department assisted with guidance, logistical support, and supplies.

“Events like the March for Our Lives are a natural extension of TOP’s program goals”, says Tullis. “We encourage constructive actions that help young people be successful now and in later life.” The YWCA’s support for student activism is a reflection of the organization’s historic mission of social engagement and advocacy for issues and causes that affect the most vulnerable in our society.