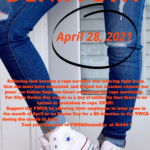 Since 1989 The YWCA of Northwest Ohio has been serving Northwest Ohio’s survivors of rape, incest, sexual assault, and sexual violence. The YWCA Rape Crisis Center offers 24-hour, 7 day crisis line availability for victims of sexual assault and their families and friends, support groups, and scheduled appointments at the office during business hours. Also, the Center offers emergency housing and financial aid if needed. Additional services include legal advocacy, hospital accompaniment, and help with state compensation claims. Our Speaker’s Bureau offers general education for the community on consent, healthy relationships, and supporting survivors.

The Clothesline Project (April 19th – 23rd ) is a visual display of violence that is too often ignored. Each shirt is made by a survivor or someone impacted by violence. The goal of the project is to bring awareness to how prevalent sexual violence and abuse is in our community and honor the strength of survivors, as well as provide an outlet for survivors to break their silence.

Denim Day (April 28th) began after an Italian Supreme Court over-ruled a rape conviction believing that because the survivor was wearing tight jeans she must have helped her attacker remove her jeans and consented. For the past 22 years Denim Day stands as a day of solidarity that there is no excuse or invitation to rape ever. Businesses can support the YWCA of NWO by allowing their employees to wear jeans in the month of April or on Denim Day for $5 and donating the ‘jeans passes’ to the YWCA! Text YWCADenimDay to 41444 to donate.

Teal Ribbons (All month) will be displayed on the patrol cars of Toledo Police Department in support of Sexual Assault Awareness Month. Thank you TPD for your support!

Watch our social media for more! We’ll be posting facts, videos, opportunities to meet our advocates, and hear survivor stories this month. Stay tuned as we engage all month long.